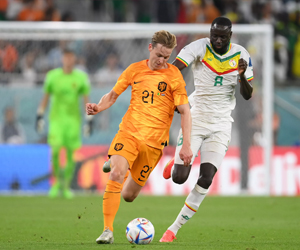 The Dutch team kicked off their World Cup 2022 journey against the African team Senegal with a 2-0 score in the Group A fixture at the Al Thumama Stadium on the 21st of November.

Cody Gakpo has already been proven to be a dependable striker at the moment of urgency. On the other hand, the football legend of Africa and all-time top scorer of Senegal Sadio Mane’s deficit was prominent in the forward lineup.

The Bayern forward was ruled out just weeks before the FIFA World Cup due to a fibula injury.

Kreplin replaced him in the starting lineup. Both the team, irrespective of their World ranking, put on a good tussle in the first half. It was the 84th minute when Dutch star Cody Gakpo broke the goal drought to score the match’s first goal.

Two of the Dutch players, Andries Noppert and captain Virgil van Dijk were debuting as goalkeeper and defender, respectively, in the big game. It was the first encounter between the two sides. Remarkably the Netherlands has remained unbeaten by any African nation in the FIFA World Cup.

On the other hand, Senegal had never failed against a European country in the group stages. It was the third appearance of the African nation in the World Cup.

Gakpo made an initial chance at 4 minutes, passing through the Senegalese keeper Édouard Mendy, but the impromptu action of the defenders denied the ball. Senegal attacked swiftly on several occasions to win corners. Both the keepers, Édouard Mendy and Andries Noppert were tasted throughout the match. In the 84 minutes of the game, Frenkie de Jong’s exceptional pass met Gapko’s head to send the ball past Mendy straight into the corner of the goal.

With the 1-0 lead, the Oranjes entered the extra minutes when another substitute player, Davy Klaassen, finished the game with a classic shot from a rebound. Memphis Depay went one-on-one against Mendy when his shot was thrown back by the keeper, only to meet Klaassen’s foot to seal the Dutch’s victory in extra minutes.

The Netherlands is now at the top of group A with three points, and Senegal is in third place. The Orange will face Ecuador and the host nation Qatar on the 25th and 29th of November, respectively. Though the group appears ostensibly harmless and easy for the Dutches, this edition of the tournament has already left spectators awestruck with mishaps in a row.

A winning start for the Netherlands! 🍊@adidasfootball | #FIFAWorldCup

The Dutch team kicked off their World Cup 2022 journey against the African team Senegal with a 2-0 score in the Group A fixture at the […]
Do you like it?0
0 Read more